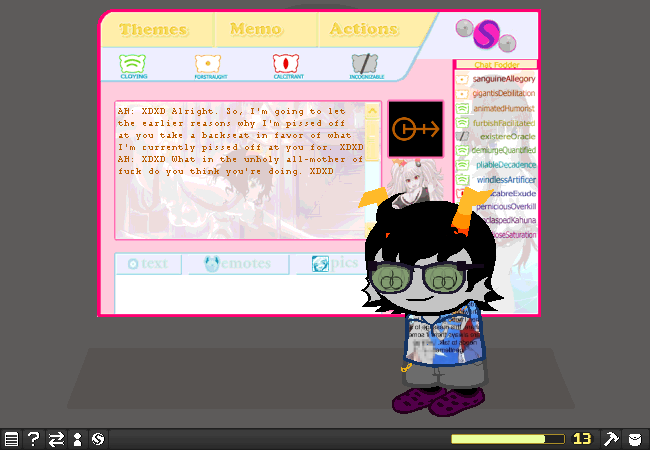 AH: XDXD Alright. So, I'm going to let the earlier reasons why I'm pissed off at you take a backseat in favor of what I'm currently pissed off at you for. XDXD
AH: XDXD What in the unholy all-mother of fuck do you think you're doing. XDXD
UK: >([rollin streig#t class moebroe]
UK: >([#ig#-quality ripped frum t#e t#ink tank imagination bank source code]
UK: >([den my lips tu urs]
UK: >([mwa# mwa# mwa#]
AH: XDXD Put those away, I don't know where they've been. XDXD
AH: XDXD If I have to see one more overrendered, pheromone-sprayed carboloader from your personally cultivated collection of lecherous arthive nonsense for self-estranged independents, I'm going to have to invent new and improved ways to make our showers burn things off more effectively. XDXD
UK: >([dindt kno# ya did t#at more t#an once a wice]
AH: XDXD Look at this! The least funny stooge in our traveling troupe of goons still thinks they've got jokes!! XDXD
AH: XDXD Even if that WERE true (which it isn't), then at least I wouldn't be debasing myself like certain parties currently are. XDXD
AH: XDXD I do a lot of shit wrong in my life, but even at my absolute unfathomable lowest... XDXD
AH: XDXD Even in the most destitute, unfortunate set of circumstances that would lead me to become as flimsy and insufferable as you... XDXD
AH: XDXD You would NEVER catch me puffing my chest out with pride in that starchy raunchfest. XDXD
UK: >([cryin s#ame gotta say]
UK: >([bc i made you 1]
AH: XDXD No you didn't. XDXD
AH: XDXD I can see everything you're doing, you lowbrow buffoon. XDXD
AH: XDXD Your shit tier items show up as pre-made recipes in the shared database, and if you had any extras, I'd be able to find them. XDXD
AH: XDXD Anyway. XDXD
AH: XDXD This is your courtesy call to stop wasting our slots on low-grade garbage while me and Taz try to make items that are of actual benefit to ourselves and others. XDXD
UK: >([slots rnt limited t#o]
AH: XDXD I never said they were. XDXD


Start Over | Go Back
RSS Feed