I'll be attending Holiday Matsuri from December 16-18th (this weekend!) in Orlando, the heart of the Devil's Armpit AKA Florida.

I'm piggybacking yet again with our good pals Rick and Chase of Run With Scissors fame for some Meet N' Greet action. If you can brave being in temperate weather during Winter, you should come see us!

I haven't been to a convention in over six years, and I've never been to one as anything more than a guest, so this will be very new to me! If any Vast Error fans want to push their luck, I'll be armed to the teeth with throwable merchandise like FREE CON-EXCLUSIVE BUTTONS and will forcibly placate them with crudely drawn doodles of their favorite characters holding each other tenderly in a metacanonical embrace. Keep an eye on my Twitter throughout the coming days for more information!

Here's some other stuff to consider while you slack off through the holiday season:

1) Did you listen to our Hollownull album? You should have. Also relisten to Corporate Holiday Hits again. Tis the season.

2) New merch will be available to pre-order at [email protected] on December 16th too! This will also be when our Redbubble finally closes for good. Restocks and send offs will happen between January and February.

3) The upcoming animation is nearly 50% complete! It's already been about two months since the last update, but this has wound up being more jam-packed and technically complex than anything else in the comic with the exception of EOA2 (maybe).

Oh yeah, it's animation time. We haven't a major one since Incursion, and I think this is really the only way to collect all of the broken probability shards left in the wake of all this Alt!Murrit mania. We have more animators and artists than ever to bring these spectacles to life, so we're aiming to really play with the visuals and formatting on this one! Much like how the comic's art style evolves in eras over time, I feel like this will mark the start of the next generation of animated troll goodness. You should be very, very excited.

Alright, let's mosey on down the list of what you can expect from DCRC for the rest of the year and beyond.

THE COMIC - After the animation, we'll back on schedule with consistent updates every few days again. From here on, the comic is mostly going to be progression, progression, progression- shoveling plot coal into the narrative tank engine and chugging along, full steam ahead.  A3A1 hasn't been easy on me! When Sova talked about the middle of a story being the hardest to write for, she wasn't kidding. It's no small feat to string a story along the way VE needs it to be done. You're constantly worried about putting things up too early, or too late.

This half of the act is really meant to be about expansion to the initial acts setup above all else. Fleshing out the main cast, their relationships and the functions of The Game and The Hyperthetical at large. I like to look at it as a slow build of information and tension until everything comes together and collapses in on itself. But I do think we could do with a little more balance. So we're going to focus on the (relative) present moving forward, and try to work in jumps and backstory more intermittently into that rather than separating them in big chunks. We actually have a very neat framing device for this after the animation, and I think it'll please just about everyone.

SNOWBOUND BLOOD - We really wanted Vol. 12 and the epilogue to be out much sooner, but it hasn't panned out exactly the way we had hoped. There have been a lot of roadblocks keeping the game from being finished as initially intended, and there wasn't much to be done about it on our end. There hasn't been many updates because there hasn't many developments, I'm afraid.

Vol. 12 is fully written and most of the assets are complete, but the epilogue is very behind schedule. Because of that, instead of releasing both at once, we're going to drop Vol. 12 as a standalone release in the very near future and try our best to put out the epilogue in early 2023. The OST will also be released on our music platforms when the epilogue is out. I'm sure that's disappointing to hear, and we want the game to be wrapped up just as much as you all do. We really appreciate your patience!

THAUMATROPE - Currently on break with no definite return date. Haustoria commentary is in the works and will be sold when it's completed. Xam made an extremely robust fantroll creator in the meantime! Do yourself a favor and check all that out. You might find some familiar looks in there!

MUSIC - We're currently working on a Halloween album! Or, as the repitonians call it: HOLLOWNULL. Unlike the Yulepassing album, this one is a concept record! It features Serpaz as the leading lady, it takes place in a bizarre probability, and will have some writing and voice acting attached. That's all I'm willing to say about it!

After that, the next record will be Volume 6. But after Volume 6 releases, we're going to pump the brakes on major volumes for a while again as the comic builds a backlog. 2023 is looking like it's going to be a year full of side projects and solo albums! Speaking of, Reminders Of You is still in the works! Don't worry, we haven't forgotten about it.

MISCELLANEOUS - The WALKAROUND is still being written and designed. It's been strong progress, but the comic will still need to take a break so we can work on it full time when its moment comes. RPG's have a lot going on! RERUNS is going to be internally overhauled before we get back to it, but it will still happen eventually. It's just not a high priority. WARTORN TRAILS is still in pre-production. We'll be handling its release differently compared to its predecessor, more on that when SBB wraps.

Site development, updating the adventure map and flash restoration are being worked on very slowly because we can't dedicate time to it over actual comic work, but it's always on the list. We might also do another Cast AMA and give you all a little something for the holidays, but no promises.

There are a couple other announcements that I could make here, but they would be better saved for their own posts down the line. For now? Enjoy your ALT!PAUSE.

You can ALSO listen to it AND download it on the DCRC Music Player or on the VE Bandcamp! Funny how that works.

In case you haven't had the chance to see our wicked announcement trailer; VAST ERROR VOLUME 5: SIDE 1 released a few days ago! 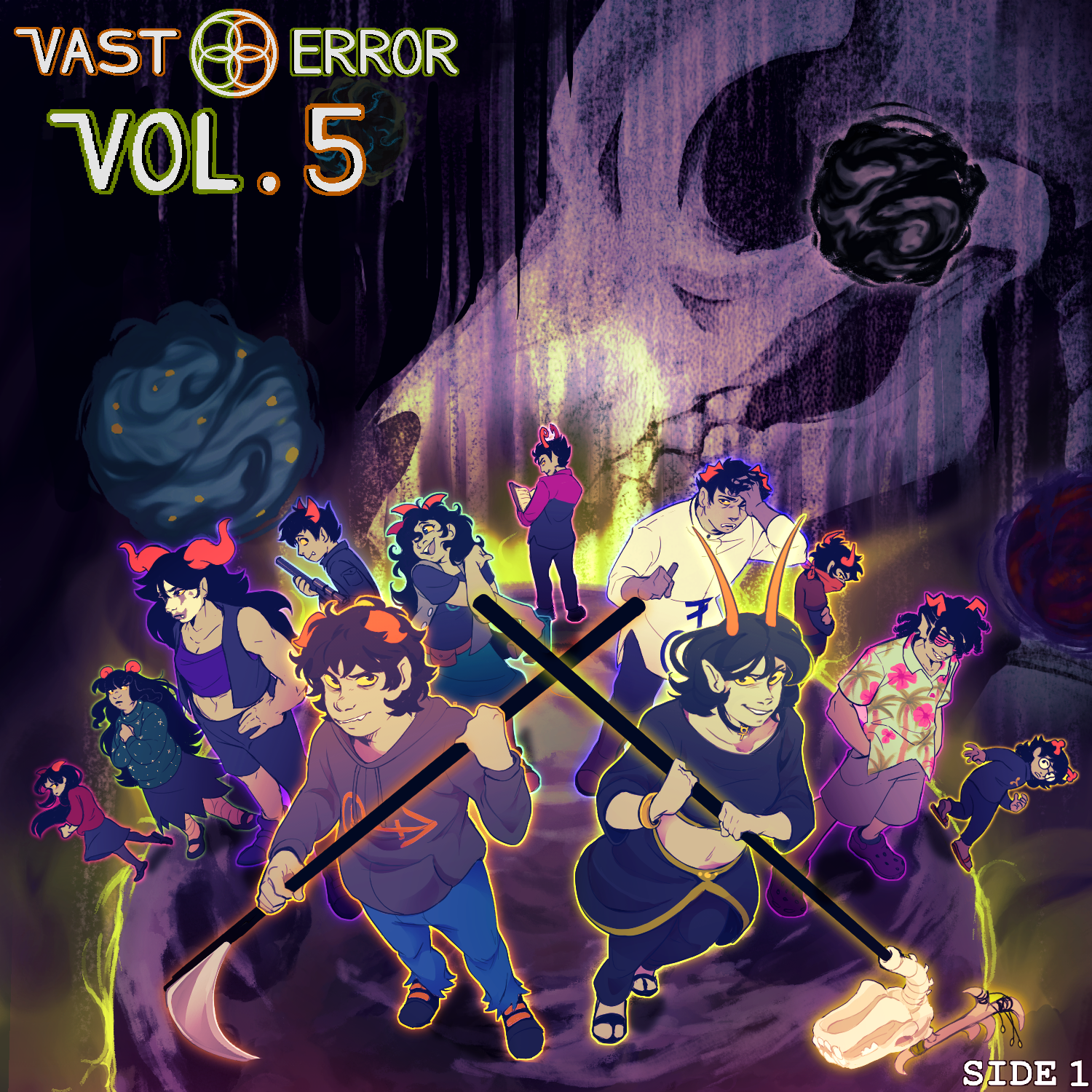 It's one half of a whole album. Which in total amounts to a grand 65 song package that's over four hours long after four years in the making. It's so much music that you might not physically be able to handle it, and you'll start frothing at the mouth and convulsing due your brain not being able to take our hypersonic rhythms and Bart Simpson samples.

You can listen to it AND download it on the DCRC Music Player or on the VE Bandcamp! Side 2 drops on 9/12, and I'll be sure to let you know when it's out too.

The Murrit crafting session is also winding down here soon. When it's finished I'll have an announcement to make, you'll see why when it happens. I'll also be using that newspost to go over what all you can expect from DCRC for the rest of this year, along with an address on the state of certain projects that have been lazing around without any news for a while. I'd say it's like the "pre-fall cleaning" post to the "pre-spring cleaning" one from earlier this year, but it will probably be happening after the start of the season. My insane duality fetish can't always win, I suppose. 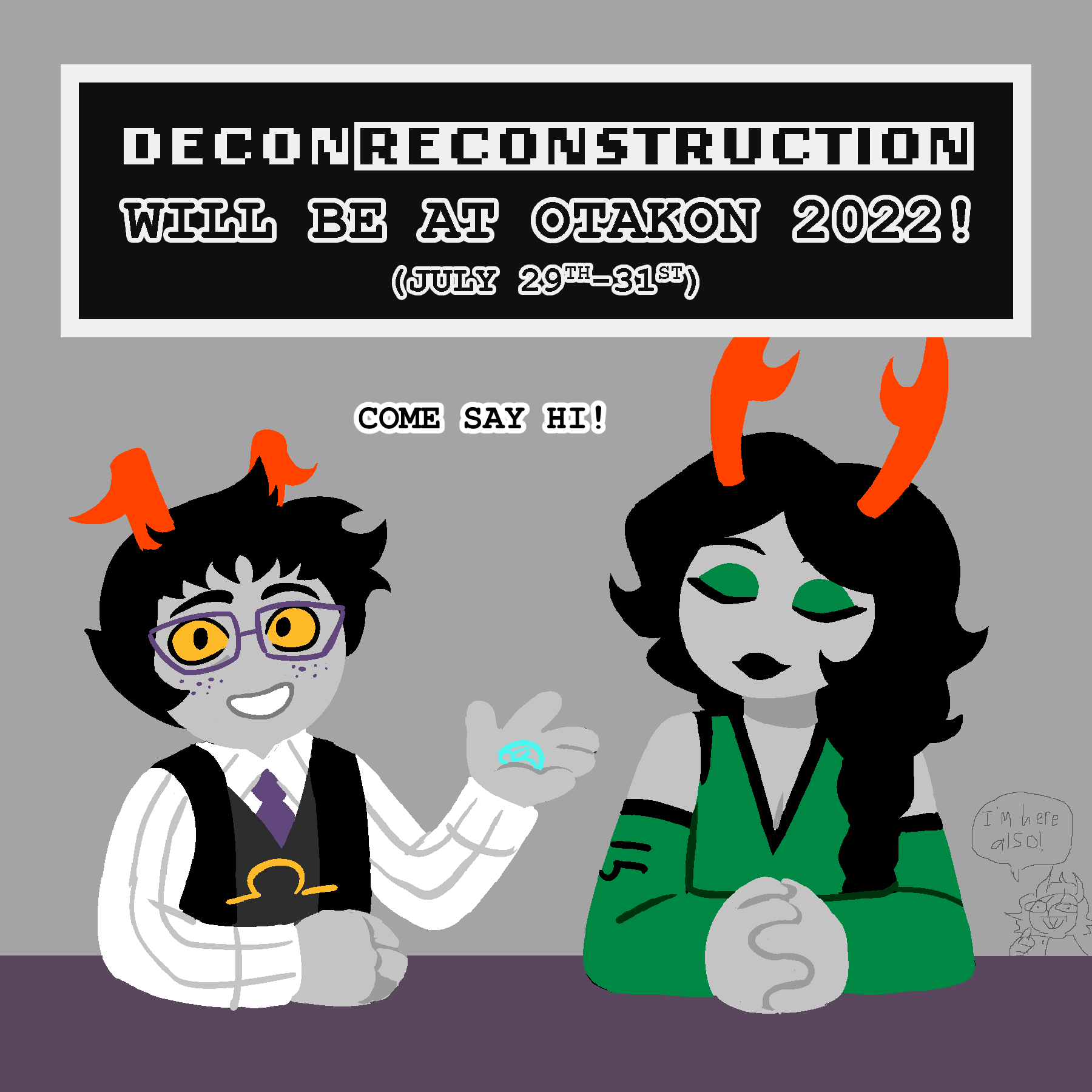 From July 29th to July 31st (one week from today!!), we will be selling official [email protected] merch in the Artists' Alley. As marked on the map, we will be located at booth C7.

Our good friends Rick and Chase were kind enough to let us share their booth with them. You might remember us promoting their webcomic Run With Scissors earlier this year? They will be holding our hands through this experience. They'll have their own selection of merch available from their Etsy store that you can — and should — throw your money at, too. They will be manning the booth alongside Kohi and their partner Lan.

We're also hoping to have some early access 5"x7" art prints available at the booth. Three of these designs were previously available on our Redbubble store, and the fourth is one that we showed off in early 2021 that is finally able to be released in physical form...

Speaking of Redbubble: it's no secret that Redbubble has been total garbage. From the buyer's side, we've seen really shitty pricing issues as well as inferior product quality depending on your location. From the artist's side, it's been even worse. Because of our close ties with Homestuck, we've had numerous products forcibly shoehorned into a fanart partnership category, only to forcibly be pulled from the storefront for being in that category. We aren't only talking about illustrations with trolls, either; we've also had sigil designs pulled (???). And so, as we first mentioned when [email protected] first launched, we will be closing our Redbubble store within the next few weeks.

We hope to see some faces there! In the meantime, expect to see more Murrit crafting binge updates steadily hitting your feed. And yes, you will see those suggestions made real. Not all of them, though (that's a good thing).